THE MAKING OF THE HYBRIDGEOTABS FILM 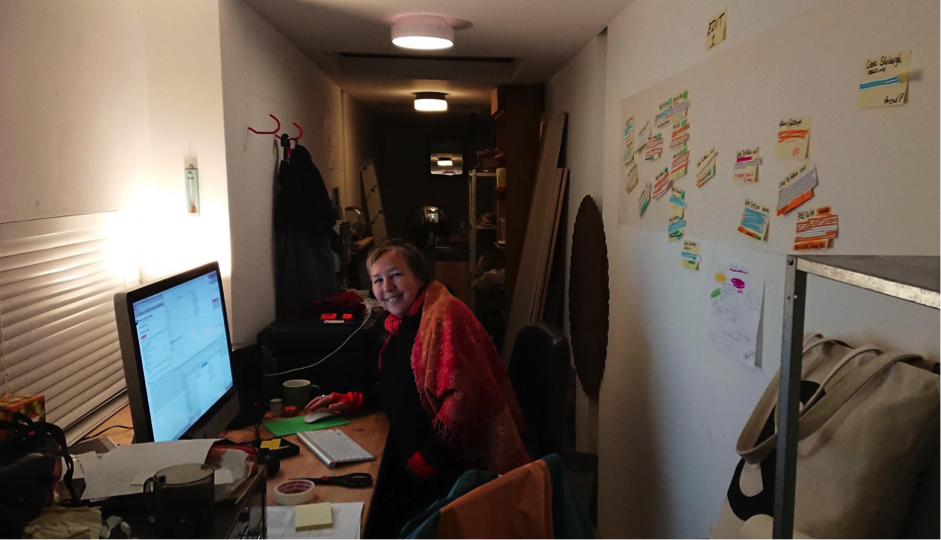 Anne Milne and Sabine Hellmann created our new film about hybridGEOTABS. Here they tell us about the next stages of their journey post-filming making this remarkable film.

Who would have known back in September 2019 when we began filming, that by the end of the project in April 2020, the world would be in lockdown from a global pandemic!

The good news however is that we were able to film in Belgium, Luxembourg and Czechia before travel, both overseas and domestic became impossible for the majority of people.

If you didn’t already read our report of this period of shooting then go to this link.

After the completion of our filming and travels, we rented a small studio locally in Glasgow close to where we both live. There wasn’t sufficient heating in this space, so the cool air managed to keep our brains alert! We certainly understood the concept of ‘comfort’ during chilly winter editing days. The first big challenge was to transcribe all of the interviews, from the overseas trips, as well as the interviews we conducted in Edinburgh. Overall we had filmed many hours of footage and now we had to distill it all down into manageable chunks. Transcribing the interviews was the first step, so we could then create a working script.

We also made a ‘paper edit’ using sticky notes, this helped us organise the content into sections on our timeline. It was also a useful tool to find nuggets of information on the wall as our script developed. The project partners were involved in this process too as we needed their input to make sure we were on the right track with regard to what the message of the video should be. We referred back to the exercises we did with everyone in Edinburgh, where we teased out the message and ‘must-haves’ of the video from all participating partners. We used this as a guide to help craft the script.

It was during this time that we also realised that we would need a narration/voice-over to fill in some parts of the script which we couldn’t easily extract from the interviews. We scripted and recorded a temporary version (realising that voice-over professionals exist for a reason!)

Once the script was in a more succinct and sharper form, we were then able to take those clips of interviews and incorporate them with the actual visuals which would make up the film. It was important to us that the viewers would be able to experience the buildings as we had. Our effort to capture a multitude of different angles and situations enabled us to weave an immersive visual experience for each building.

We had also decided early on that showing the buildings from the air was important, as they are architecturally interesting. Plus aerial footage definitely gives a strong ‘punch’ to any video and places the buildings into the wider context of their surroundings.

We went through a number of versions of our edit, so that by the time of the Maastricht meeting in early March, we had what we called a ‘rough cut’ to show the team. We heard that it was quite a successful screening event, and we were sorry to have missed it in person.

With feedback in hand, we went back into the edit and just managed by the skin of our teeth to get the final version finished, and reached ‘picture lock’ before we all ended up in lockdown! But such is the nature of our modern world, that all of the post-production work could continue as normal, only we would communicate digitally, using online data transfers.

We spent many hours on Skype sharing the work in progress, working with a graphic designer who made all of the screen text and overlays, as well as a sound designer, who recorded a new voiceover with a voiceover artist. And last but not least the colour grade, which was the final piece of the puzzle.

We are very happy with the final film and how it conveys the concept in such an engaging and beautiful way. We hope that it will help with future hybridGEOTABS research, funding and implementation.