FILMMAKERS ANNE MILNE AND SABINE HELLMANN PROGRESS WITH OUR FILM 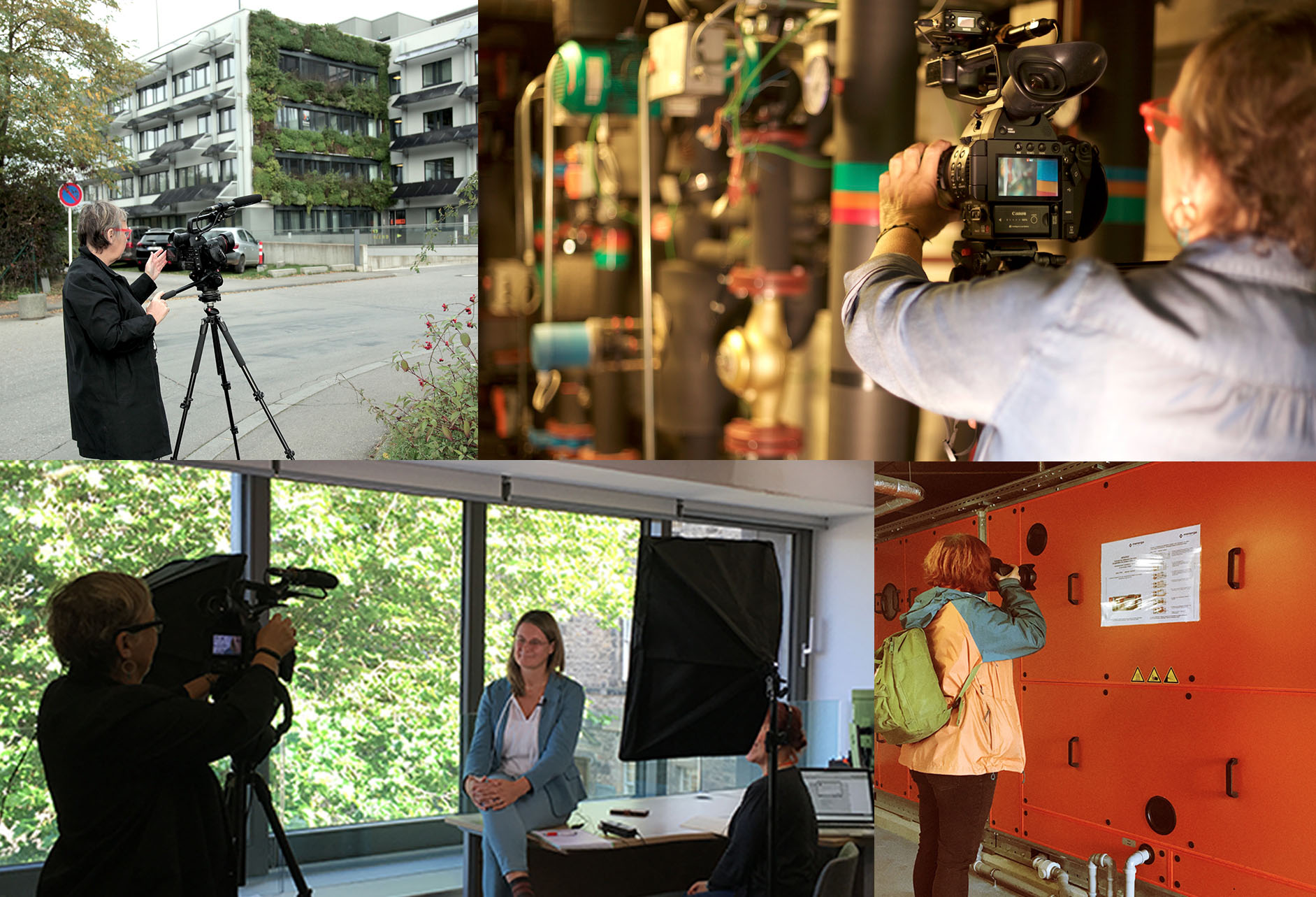 Anne Milne and Sabine Hellmann have been travelling filming our partners and buildings, and their users, in Belgium, Luxembourg and Czech Republic. It's all progressing well, and a plan for completing the film in April. Watch this space!

Here's Anne's summary she kindly wrote for us:

In October we went on a combined trip to Belgium and Luxembourg as the three buildings Infrax, Ter Potterie and Solarwind were not too far from each other.

The first days we spent on the outskirts of Brussels to capture the Infrax (now Fluvius) building and chat to Damien and Wim. It was great to get such a detailed insight to the building and see the systems in place. We filmed in the Boydens Engineering office area and experienced the hybridGEOTABS comfort ourselves: No stuffy rooms, lovely bright open plan office and pleasant working environment. We also got an introduction to the technical rooms, filmed lots of pipes, sounds and technical installations.

Then it was time to head to Bruges. It was quite a contrast to the more industrial estate look of Brussel’s outskirts to suddenly arrive in a picturesque UNESCO heritage town with cobbled streets, canals and pretty windmills sitting on the dykes that surround the old town.

Despite having seen pictures of Ter Potterie, we noticed how big this building was in real life, but also how well it fitted within the town’s historic character.

We met Ann van Dyke, the Technical Director of Mintus who runs the care home. She gave us an introduction to Ter Potterie and together with Fernand Mus, the Manager, took us around the different areas of the building. It was impressive to see the various ‘wings’, activity rooms, common spaces and get brilliant support from them to talk to staff and inhabitants in order to decide what to capture. We also had lovely weather, which resulted in us doing a variety of outdoor shots of the building. It was lovely to talk to some of the inhabitants and hear about their experiences. We also met Lieve, Wim, Jelle and Eline and captured more interviews. We also covered more of the technical aspects of the care home and quirky details that make this place really welcoming and homely. A Belgian drone pilot met with us to discuss how to best capture Ter Potterie and also Solarwind.

An outing into the town’s centre to check out the tower from the movie In Bruges (we watched the night before) had to be cut short as we had a long drive ahead to reach Luxembourg.

Away from the more Flemish culture, the landscapes changed and we arrived in hilly, autumnal forests of Luxembourg to capture a lovely sunset at Solarwind - an impressive building with lush living walls and solar panels.

The next day we met Leif Chiotis from Boydens Engineering Luxembourg division and a representative of the building owner and received an in-depth introduction to the building, which sports a multitude of environmentally sound technologies. We were especially delighted to discover bee-hives on the green roof and had a sunny afternoon filming on the roof terrace with Leif. This time we also saw where the geothermal boreholes came out of the ground and also captured a huge water tank, a wood pallet burner, more heat pumps and ventilation shafts hidden in the 4-storey deep car park underneath the building.

An intensive week of filming and meetings came to a close and yes, we were also introduced to the best Belgian fries by Wim Boydens :)

In November, we undertook our second trip to Czechia and arranged to meet Jan Šulc at Libeznice school the first day. Although a much smaller building than the others, it was the most fun to film. Nestled in a cute town outside Prague, Libeznice primary school looked striking with its beautiful round shape cladded in wood. But it was the inside that revealed colourful, creative interior design that was really surprising. We spent lots of time capturing the colours, the solar system decorations and kids feet running around. And we were lucky that the mayor (who is also a Czech MP) was present and was able to give us a short interview in the school. In the afternoon, we met Lukas at his office of UCEEB and received an introduction to the research centre. This was a fantastic opportunity to see cutting edge technology of sustainable building research, right across the road from a more Soviet-looking gigantic factory setting.

In the evening Lukas and Jan invited us to some traditional Czech food in a cosy, vaulted restaurant in Prague, where we could discuss the next day of filming. Of course, the Czech food did not disappoint.

The next day the sun came out and allowed us to capture gorgeous autumnal outdoor shots and observations of the pupils in the classroom. We talked to one of the teachers and heard more about how the school works from Jan.

It was a successful trip and we have now finished transcribing all the interviews, ready to develop a more concrete storyline.